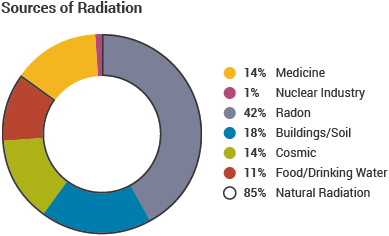 Directly ionising radiation strips electrons from atoms electrostatically. Indirectly ionising radiation causes electrons to be ejected from their atom by Compton scatter and the photoelectric effect. In the former, the fraction of the photon energy transferred to an outer electron is proportional to the cosine of the scatter angle. In the latter, all the photon energy is transferred to an inner electron. An electron must acquire an energy greater than its binding energy to be ejected [1]. The common sources of background radiation are given in Figure 1. The average exposure per year, per individual, is ≈2.4 mSv, which is equivalent to a fatal cancer risk of 0.012% for individuals aged between 30-60 [2,3]

Relative biological effectiveness (RBE) is the ratio of the dose of radiation of type x, Rx required to produce the same biological effect as a reference dose RR which is normally a high-energy x-ray beam (250 kVp) or a gamma-ray from Cobalt-60;

RBE increases with LET until a critical point of ≈100 keV/μm. The overkill region arises because the increasing dose has no further biological effect [1].

The RBE of radiation may vary depending on its subcellular distribution: for example, when situated outside the cell, Auger electrons have an RBE of ≈1; this value increases ≈10 - fold, however, when localised within the nucleus [8].

The biological effects of ionising radiation are caused by the secondary electrons from an ionisation event, not the primary radiation beam [9]. These electrons deposit energy within tissues causing molecular damage and the formation of toxic chemical species. Although ionisation and free-radical production occur on a sub-second time scale, biological effects may take years to manifest. [10].

Free radicals such as hydroxyl (OH•) and hydrogen (H•) form when radiation interacts with water. Secondary and tertiary molecules including (O2•-) and hydrogen peroxide (H2O2) are then produced, and interact with endogenous nitrogen molecules such as nitric oxide (NO•) to produce reactive nitrogen species including nitrogen dioxide (NO2•) and peroxynitrite (ONOO-). These molecules may cause DNA damage, protein oxidation or lipid damage [2].   Biological effects are classified as stochastic or deterministic. Stochastic effects are probabilistic: the likelihood of them developing increases with radiation dose. They are primarily caused by low-radiation doses and have no lower-bound threshold. Deterministic effects are dose-dependent: the severity of the biological effects increases with radiation dose; they have a lower-bound threshold and are primarily caused by high-dose radiation [1,11].

Direct effects, following ionisation or atomic excitation, include the breakage of molecular bonds of DNA (deoxyribonucleic acid) or proteins, molecular degradation and intermolecular cross-linking. They occur within a picosecond of radiation exposure and are typically induced by high-LET radiation [2,15]. Indirect effects, due to low-LET radiation, occur over a longer period and are mediated by free radicals and reactive oxygen or nitrogen species [15]. The majority of DNA damage occurs due to indirect effects because water, the source of free radicals, contributes 70% of cellular composition [11]. However, direct DNA damage is more potent because radiation with a high-LET can induce multi-strand breaks [16]. Indirect effects may occur at a distance from the initial radiation site. In addition to DNA strand-breakages, base losses or changes also occur. Non-irradiated cells may express radiation-induced biological effects secondary to the release of signals from directly-irradiated cells in their vicinity. This is termed the bystander effect and is distinct from the abscopal effect in which tumour cells distant from the primary radiation-site diminish in size. The latter is thought to be mediated by the immune system [17]. Although the number of DNA lesions is large for a given radiation dose (1000 single-strand breaks and 40 double-strand breaks per Gy [10]), the number of cell fatalities is low: most radiation-induced DNA changes are detected and repaired by enzymes. Persistent mutations can cause genetic and somatic effects, as well as cell death The consequence of an un-repaired mutation will depend, in part, on the biological function of the affected gene [10].

On a subcellular level, different organelles have different radiosensitivities: for example, both the cell membrane and nucleus are more radiosensitive than the cytoplasm [9,19].

The effect of radiation on cells can be visualised on a cell-survival curve, which plots the proportion of cells that survive at a particular absorbed dose of radiation (Figure 3).

The steepness of Figure 3b will increase in response to several factors including an elevated local cellular oxygen concentrations (as oxygen stabilises free radicals, prolonging their half-life) and radiation with a higher LET. The oxygen-enhancement ratio (OER) is the ratio of the radiation dose required to produce a particular biological effect in hypoxic cells, CH and oxygenated cells, CO; OER = CH/CO. Its value is ≈3 for low-LET radiation and ≈1 for high-LET radiation [10].

Biological effects may be acute or chronic. Chronic effects arise following multiple low-dose radiation exposure events, primarily in slowly proliferating cells. The effects can be stochastic or deterministic and may manifest genetically (in future generations) or somatically (e.g: teratogenesis, reduced life expectancy); examples of deterministic effects along with their associated threshold-doses are given in Table 4. Stochastic effects include germ-cell mutations, and cancer: the likelihood of developing leukaemia or a solid cancer per 100 mSv is 1% [20].

Acute effects arise shortly after exposure to a high radiation dose, primarily in rapidly proliferating cells, and include erythema, conjunctivitis and acute radiation sickness (ARS). Table 5 gives the acute radiation dose required to produce several different biological effects. ARS has a natural history that is divided into 4 stages (Fig.10). In the prodromal stage, non-specific symptoms such as nausea and vomiting arise. The latent phase may last several weeks. Haemopoetic symptoms such as prolonged coagulation time and a dampened immune response arise at 250-500 rad. Gastrointestinal effects including gut ulceration and loss of intestinal villi occur at 500-1000 rad. Neurovascular symptoms include motor- and sensory-dysfunction, and reduced levels of consciousness develop at 5000-10,000 rad. Mild symptoms of ARS include fatigue, loss of appetite and sweating [11,21]. Figure 4 illustrates the consequences of, and relationship between the different components of ARS.

Chronic exposures, per unit of radiation, are less biologically significant than acute exposures as the body is capable of repairing any damage incurred between exposure events [22].