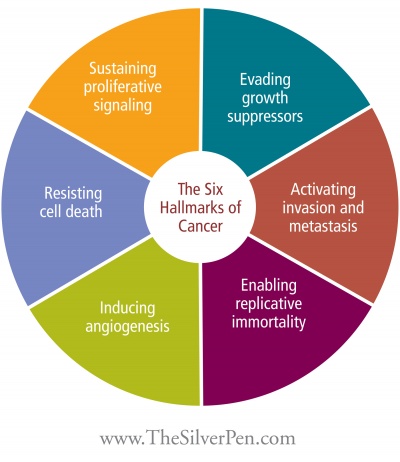 According to Cancer Research UK, cancer is the most feared disease in Britain and was responsible for 162,000 deaths in 2012 in the UK alone[1]. World-wide this figure was at least 8.2 million [2]. Although the overall incidence of cancer has risen by as much as 43% over the past 40 years, the net mortality rate from this disease has halved in the same time-frame1. The increased incidence in cancer may be due to several factors including an aging population and poor lifestyle choices such as a reduced physical activity and smoking[3],[4]. Another possible cause for an increased incidence is an elevated awareness of cancer, leading to a greater number of case-reports by patients. Despite the increased incidence of cancer, technological improvements have been able to reduce the mortality from cancer due to earlier diagnosis and improved treatment options.

Cancer can be defined as a group of diseases that result in abnormal growth of cells leading to an impairment of normal function and a subsequent increase in morbidity and mortality[5]. It refers to a state of autonomous growth and proliferation that is caused by genetic alterations, predominantly in somatic cells [6]. In human cells multiple mutations are required before a tissue becomes tumorigenic [7]. In 2000, Weinberg and Hanahan published an article outlining six key hallmarks of cancer cells (Figure 1) [8]. In 2011, they published a follow-up article and extended the list to include four additional hallmarks [9].

Further information can be found on the following pages: 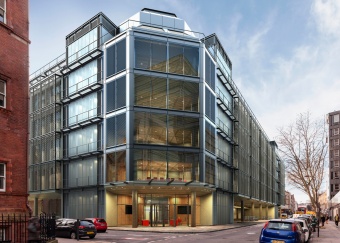 Modern cancer treatment is largely a combination of 3 techniques — chemotherapy, radiotherapy and surgery — each of which has associated advantages and drawbacks. Conventional radiotherapy utilises X-rays with energies from 6 MeV to 18 MeV to irradiate cancerous regions of the body from multiple directions: the most modern variants of Intensity Modulated RadioTherapy (IMRT) provide a continuous intensity modulated X-ray beam through a full 360° arc, maximising the dose to the tumour whilst minimising the dose to the surrounding tissue. 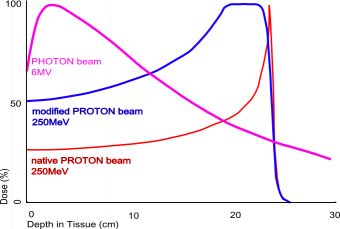 The dose produced by a native and by a modified proton beam in passing through tissue, compared to the absorption of a photon or x-ray beam

The drawback of conventional radiotherapy is the amount of dose delivered outside the desired treatment region. At the energies used for radiotherapy, the peak energy loss for photons occurs within a couple of centimetres of the surface of the skin, with a slow reduction in energy loss as a function of depth. This unfavourable dose distribution is balanced somewhat by the multiple beam approach used in IMRT, but still leads to significant dose deposition in otherwise healthy tissue. This has particular significance in the treatment of deep-lying tumours in the head, neck and central nervous system, particularly for children whose bodies are still developing and are particularly susceptible to long-term radiation damage.

Proton Beam Therapy (PBT) is a more effective alternative to conventional radiotherapy, where high energy protons (60-250 MeV) are used in place of X-rays. The advantage of PBT is a consequence of the markedly different dose deposition profile of protons: as a result of the Bragg Peak most of the energy is deposited in the last few millimetres of the proton path. This allows a precise tuning of the delivered dose through appropriate selection of the proton beam energy and leads to much lower doses of radiation outside the target volume.

More information on the physics of proton beam therapy can be found on the Proton Beam Therapy page.

Large-scale PBT facilities for cancer treatment are a new undertaking in the UK. The UK's only operational PBT centre is the Clatterbridge Centre for Oncology on the Wirral: with a 62 MeV cyclotron and a penetration depth less than 4 cm, treatment is limited to eye tumours.

Two new centres based at University College Hospital in London (UCLH) and the Christie Hospital in Manchester are currently under development. These will treat a total of 1,500 patients a year, primarily those with the most challenging tumours of the head and neck and the central nervous system.

To support these new treatment centres, UCL is engaged in a number of research programmes within both High Energy Physics and the UCL Dept. of Medical Physics to improve the quality of proton therapy treatment: